EDGE OF THE EARTH EPISODE RECAP:
The Great Unknown 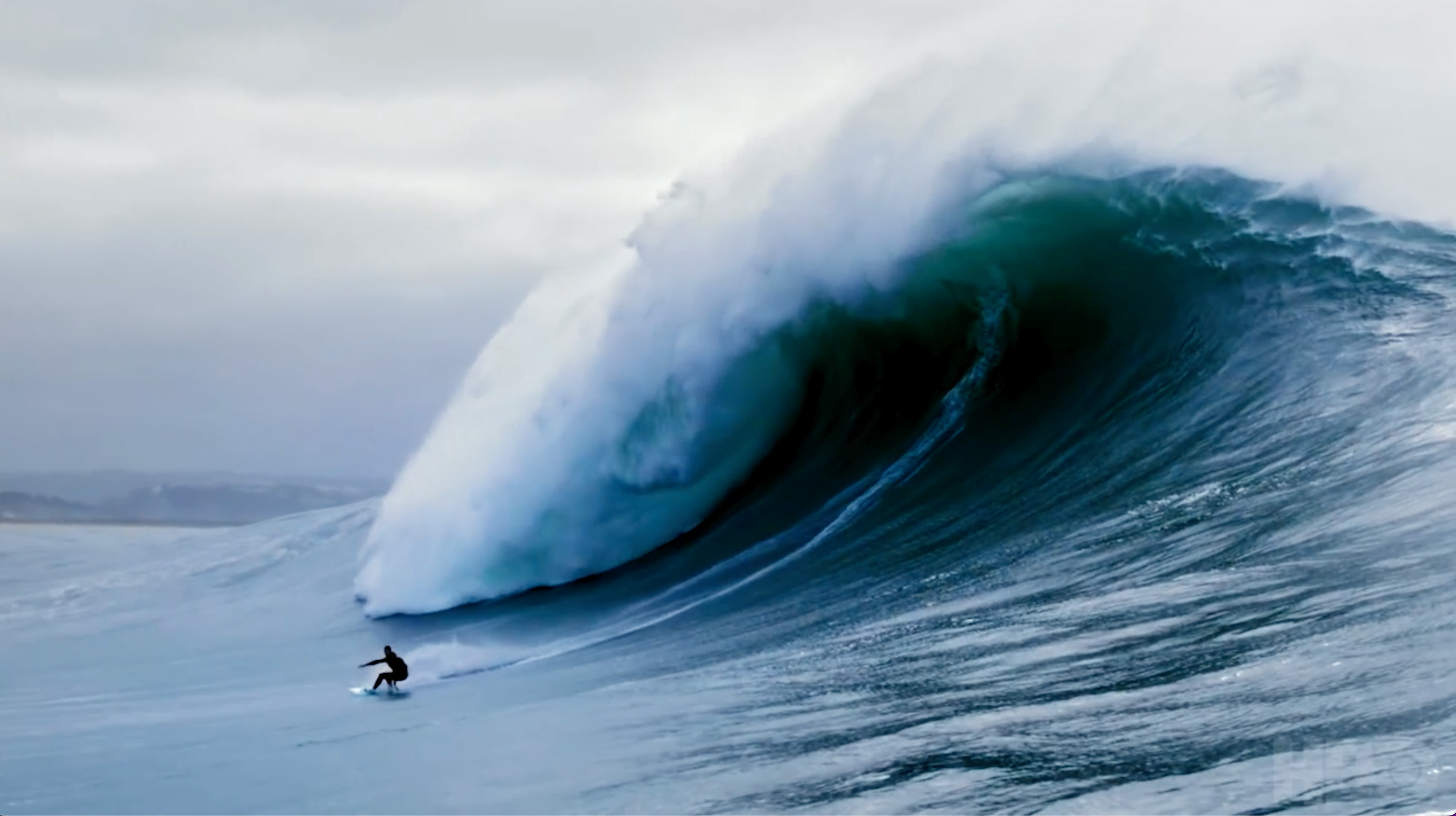 Cosmic executed post supervision, color, and VFX on the four-part HBO docuseries, Edge of the Earth.

As a 3x World Big Wave Surfing Champion, Grant “Twiggy” Baker has traveled all over the world, but sees the remote water of Africa’s West Coast as the final frontier.

“Everything that you want in life is on the other side of your fear,” says Baker. “Africa has an allure of danger and excitement; the water, the color…everything about it is unique and special.”

Joining him is fellow big wave surfer Ian Walsh, who Baker describes as the perfect partner and one of, if not the best, big wave surfers in the world.

“Growing up on Maui, every waking moment was consumed by surfing and being in the ocean. My parents had one rule for my brothers and I: as soon as the street lights come on it’s time to head into the beach. Sunrise to sunset,” says Walsh. “Growing up in that environment, you start dipping your toe a little deeper, and then you start surfing the outer reefs, and then Jaws found me. I was 16 or 17. That was a different feeling than anything I’ve ever had. And that became almost addictive for me, to be chasing and targeting waves around the world.”

“For me personally, it’s always been about the next wave, the next location,” says Walsh. “You look at the entire world, and there can’t just be four iconic big waves: Jaws, Nazare, Mavericks, and Wiamea. There has to be another location.” 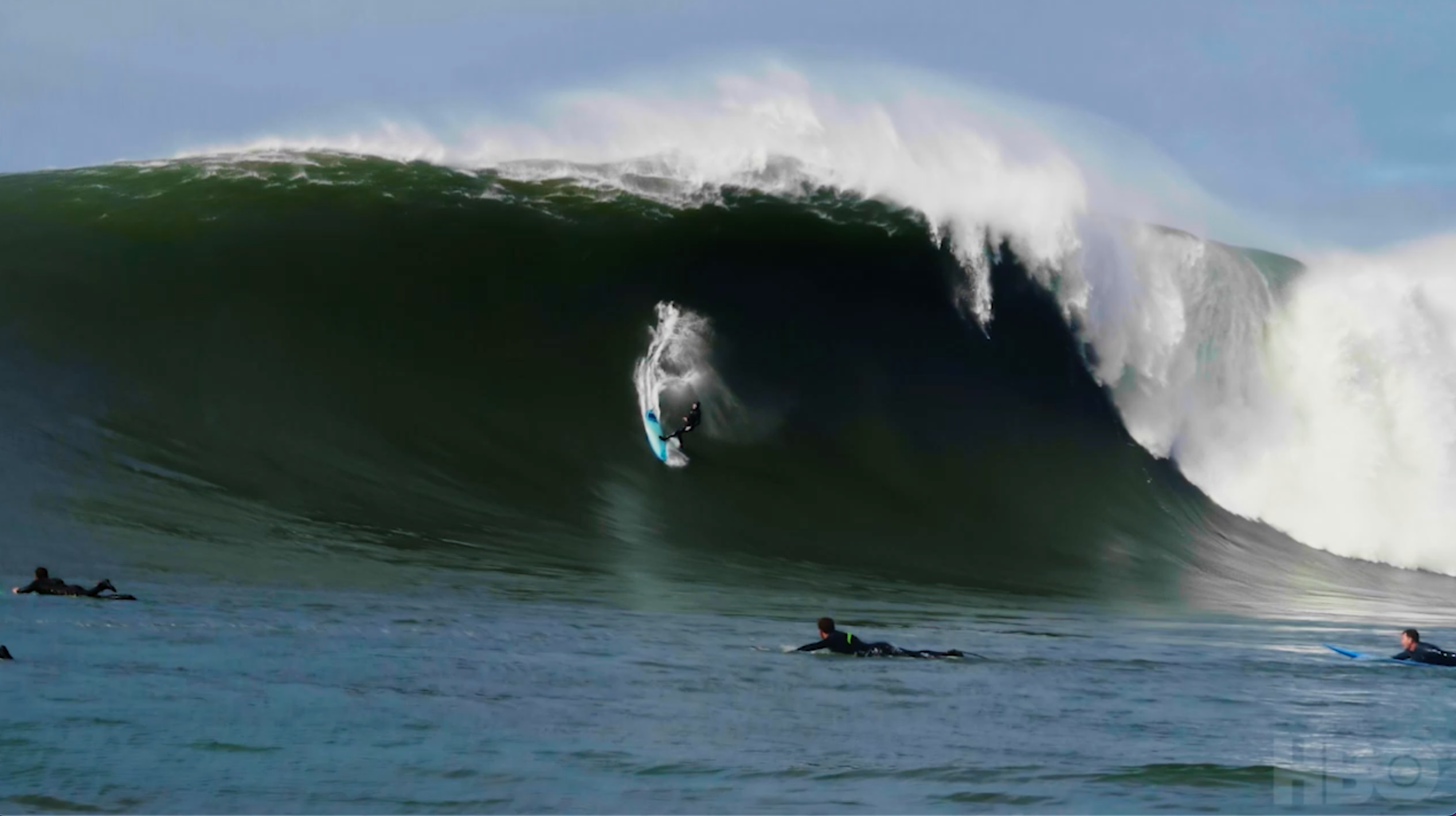 The objective is to tackle a big wave they’ve named The Peak, which Baker believes could be one of the biggest waves in the world. He explains The Peak’s potential is the deep water on the outside, with outer reefs coming out of deep water coming into shallow water. Adding in reef breaks, sandbards, point breaks, and everything in between, it’s all new to Baker and Walsh.

Walsh explains Baker’s desire to push himself is what they connected on initially. “He’s not afraid of hard work, to find new waves, and he’s been at the forefront of suef exploration.”

“I think all big wave surfers are on that spectrum: either completely mad or super calculated. And this adventure part of it, where these are new waves…there’s more danger involved because you don’t know how the waves are going to behave. Where are you gonna end up after a wipeout? Are you gonna get pushed into rocks? You know, it’s all an unknown. And that unknown makes it more exciting for us,” he says. 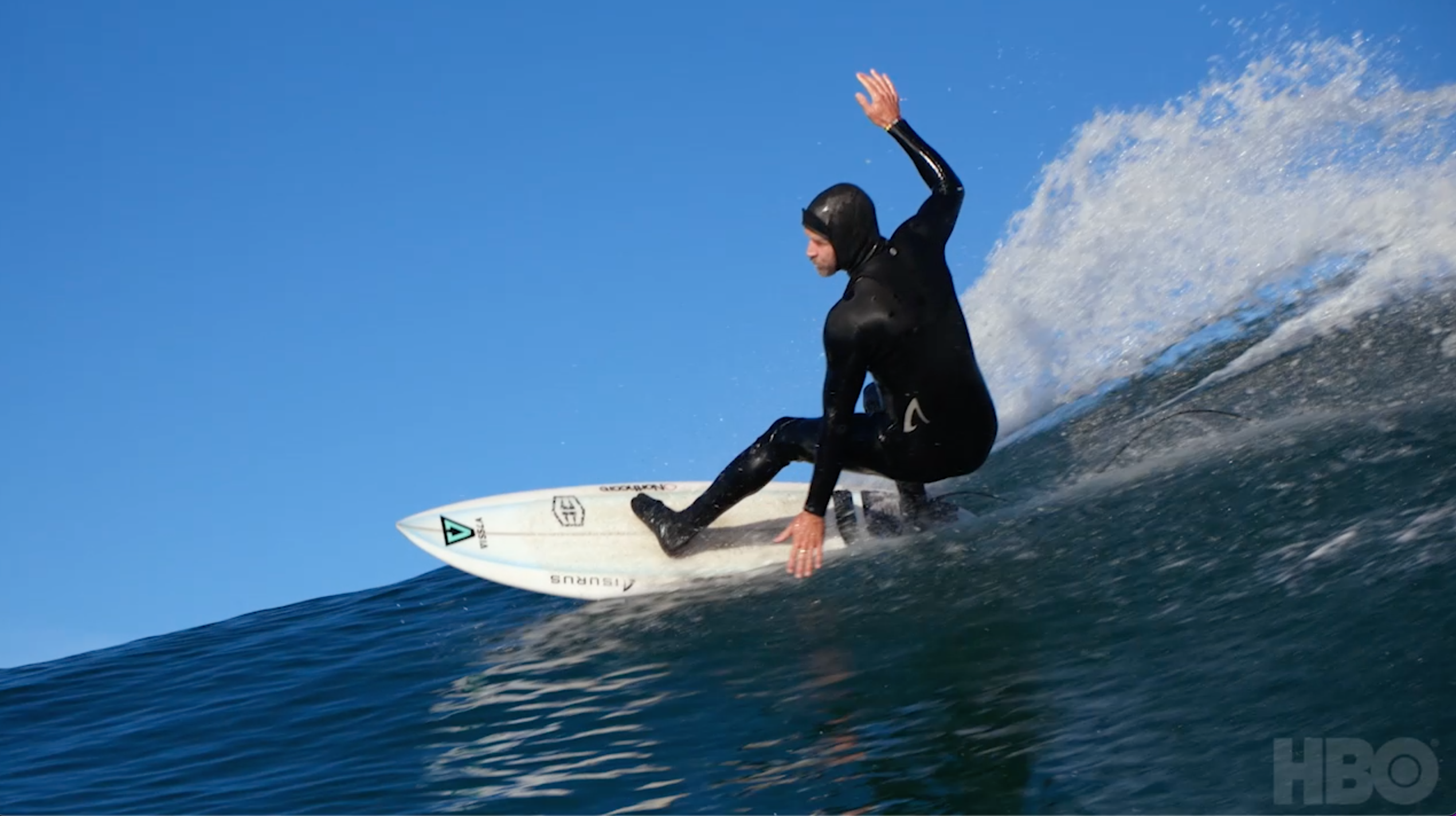 Baker explains the challenge of leaving his young daughter and wife behind; while his daughter is too young to know what he’s doing or how dangerous it really is, his wife trusts his judgment, “She knows if the wave comes, I’m gonna go.”

Baker has a hunger to chase waves: big, small, perfect, and everything in between. These trips are what give him excitement, and make him feel like he's 20 again, going on his first big surf.

“Putting myself out of my comfort zone and looking for places, waves, and people who will excite me and challenge me…that’s what keeps me alive and focused.”

Though the trip requires immense planning and prep, both Baker and Walsh agree it is worth it for this final surfing frontier. The pair meet in Cape town to pick up gear: camping supplies, water, and fuel- everything needed to survive in the desert for three weeks. They begin to monitor weather conditions, anticipating the biggest storm the Southern Atlantic has seen this entire season, and maybe for the last three years.

“As a big wave surfer this is ideally what you’re looking for,” Walsh says. The ideal scenario is a big storm with a little bit of energy starting underneath South America while building momentum as it gets deeper across the Southern Atlantic. Once it gets half way across, it stalls out and creates a gigantic storm, finally sending the swell energy in the surfer’s direction. 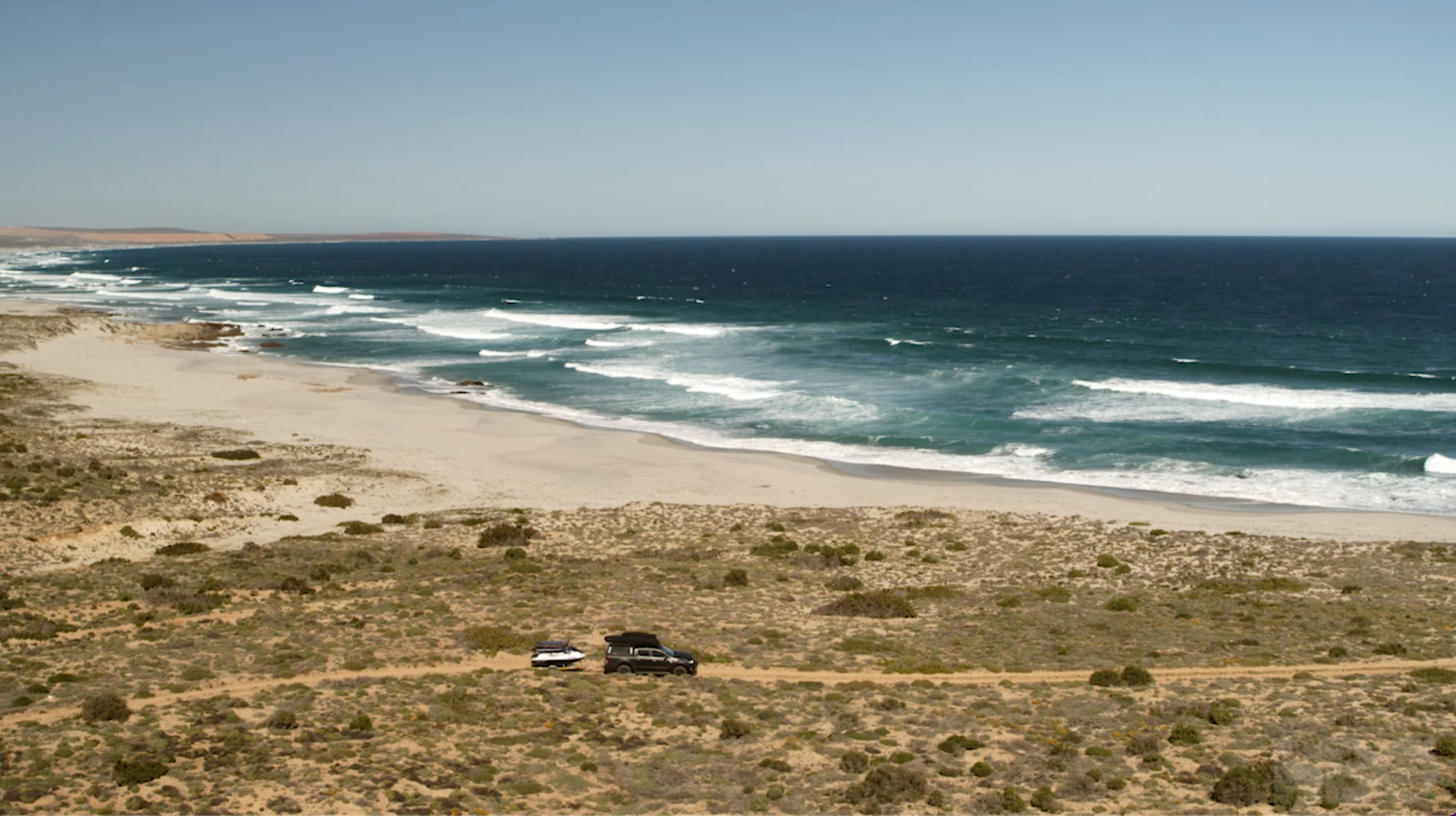 Day one is marked by heading to basecamp. “I’ve been surfing for 40 years, and the feeling as you come over the rise and you see the ocean for the first time is still the same. And you know, the excitement is still the same,” says Baker. The team sets up camp in a remote, wave rich area of the beach.

“The reason it is so undiscovered is because there’s just no people there. It’s in the desert; there’s just no reason for people to live in those conditions. But for a surfer, it’s you know the best place in the world,” says Baker. “It’s like having the entire coast of California to ourselves.”

The importance of a topnotch safety team is emphasized, and the “best watermen South America has to offer” have joined this trip. Andrew “Rooster” Lange, Lead Water Safety, feels lucky to work with Walsh and Baker, saying they bring unlimited knowledge and that when it comes to Walsh, that he and his brothers “basically wrote the handbook on safety in big wave situations.”

“Safety has become something that’s really important for me,” says Walsh. “You’ll never be able to take out all the risks, ever. And I’ve found over the years how important it is to have that safety plan in place to allow you to push yourself and minimize the risks as much as you can.”

Both Walsh and Baker were present with acclaimed big wave surfer, Greg Long, drowned in Cortes Bank as was brought back to life.

“That’s really when I started understanding the need for safety,” says Baker.

The remoteness of this location amplifies everything, hundreds of miles from any resemblance of hospital. With other big waves locations like Jaw or Mavericks, you can have an ambulance at harbor waiting for you if something bad happens; if something happens here, there’s no chance an ambulance can reach them in time.

Walsh compares a violent fall off a big wave to being in a car, driving as fast as you can, swerving off the road and starting to roll. He says, “You’re going five football fields in a blink of an eye underwater. The difference between falling at locations you know very intimately, like Jaws and Mavericks, compared to somewhere you’ve ever even surfed is a whole different ball game.” 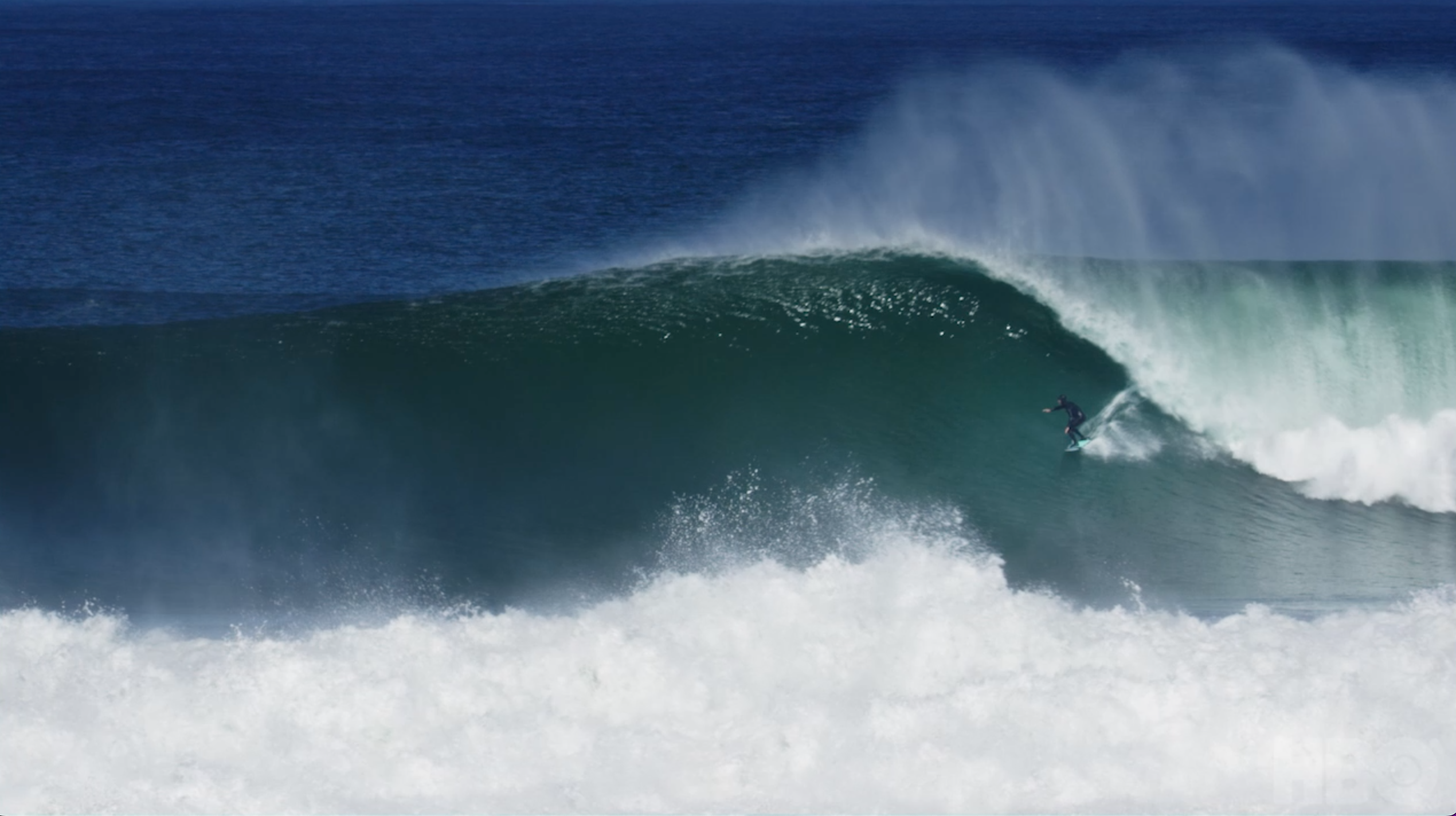 With so much coastline, potential, and unknown as surfing is so reliant on the weather, unless you’re patient and put in time, these waves will not be found. Walsh remains hopeful, “We wouldn’t be surfers if we weren’t hopeful for tomorrow.”

Baker begins to speak on mining now disrupting beaches, and his motivation to start a coalition, Protest the Coast, to fight it, “Unfortunately, the west coast is a mining area. It’s rich with minerals; it’s rich with diamonds. It’s been heavily mined in the past, but not to the extent we’re seeing with this new form of mining that’s come along. Digging up the beach, pushing the sea wall back, and then completely excavating the entire beach.”

The team experiences on and offs of unexpected weather, and day 14 brings 40 mph wind and 10 hours of pelting rain. They were anticipating the largest swell on day 17, but found the swell downgraded, leaving them questioning if it would be big enough to surf The Peak. As the day rolls on, Walsh and Baker begin riding sets that get bigger over time. Later that night, they have a final safety briefing for the next day, where they’ll attempt to conquer The Peak.

“There’s always fear there, obviously. And what you get out of big wave surfing is learning how to be able to control that fear and use that fear to guide you and help you make good decisions,” Baker says. 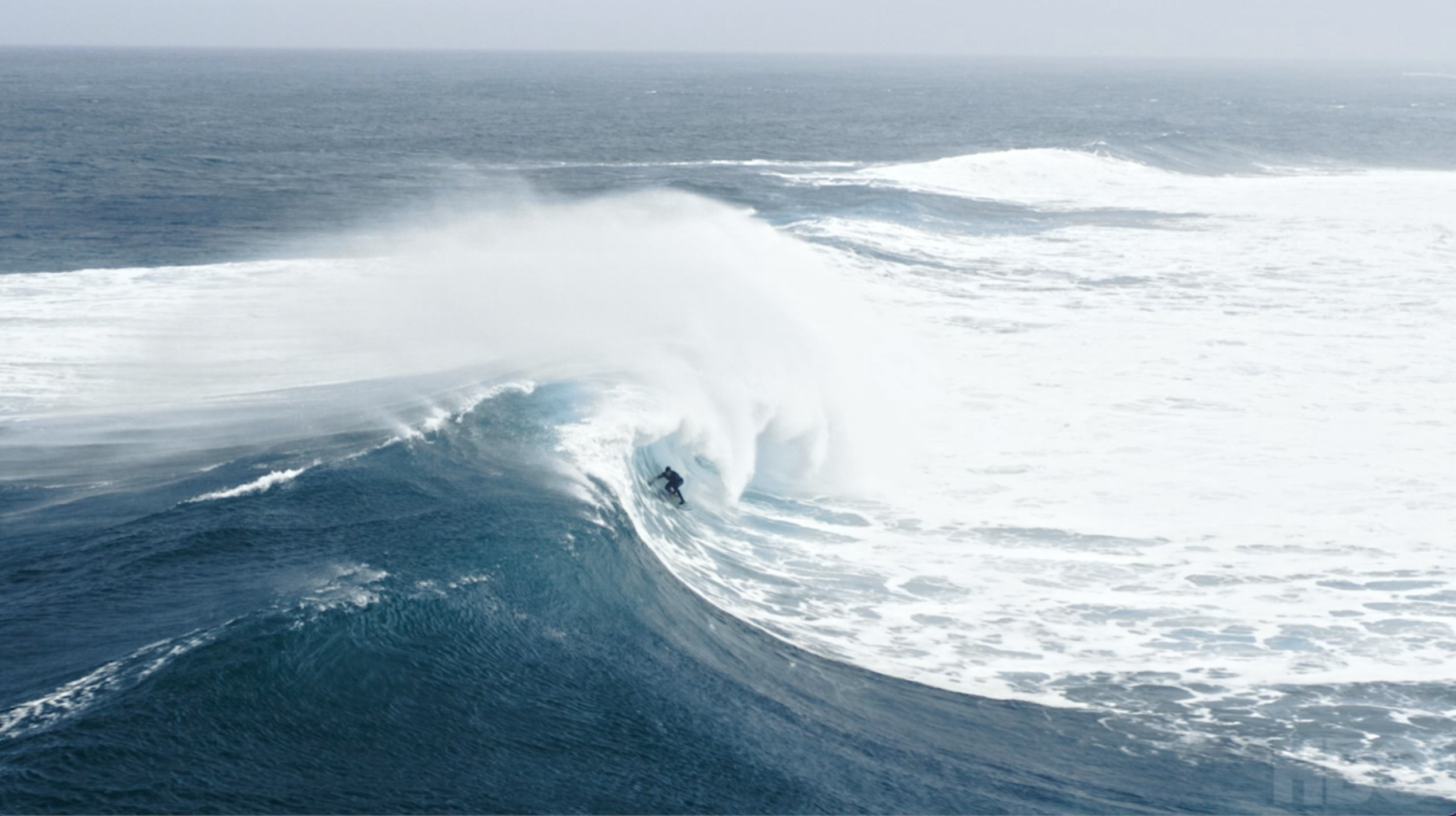 With one jetski down, the day begins to a rough start. But eventually, the pair is able to go out and begin to ride, emphasizing insane pickups and the bigness of it all.

“There’s no doubt- I mean, this is a world-class zone,” says Baker. “Even though we didn’t score The Peak, you know, the waves that we found, the waves that we surfed, put this little stretch of coast on the map. And we’re gonna be back for sure. And I’m sure there’s going to be a lot of other surfers wondering where this place is and wanting to get it.”

“We came out here with a goal to find undiscovered surf and potentially new big wave locations. And during this trip, we were able to find way more. There are waves everywhere we look. The potential for really good stuff is littered throughout this entire coastline,” adds Walsh.

“A place like this is gonna reward you for your efforts. So all these waves exist because Africa is still raw, undiscovered, wild,” Concludes Baker. “Kind of mind-boggling to think of the potential of how many waves there are still to be discovered. It’s a lot of time and a lot of commitment, but when you get those special moments, it’s so, so rewarding.